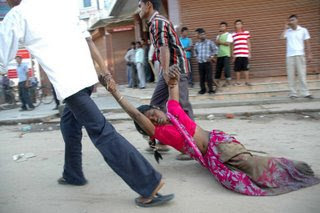 We (the undersigned) read with growing dismay the statement signed by
Noam Chomsky, Howard Zinn and others advising those opposing the CPI(M)'s
pro-capitalist policies in West Bengal not to â€œsplit the Left in
the face of American imperialism. We believe that for some of the
signatories,their distance from events in India has resulted in their falling prey
to a CPI(M) public relations coup and that they may have signed the statement without fully realising the import of it and what it means here in
India,not just in Bengal.

We cannot believe that many of the signatories whom we know personally,
and whose work we respect, share the values of the CPI(M) - to "share
similar values" with the party today is to stand for unbridled capitalist
development, nuclear energy at the cost of both ecological concerns and
mass displacement of people (the planned nuclear plant at Haripur, West
Bengal), and the Stalinist arrogance that the party knows what "the
people" need better than the people themselves. Moreover, the violence that has
been perpetrated by CPI(M) cadres to browbeat the peasants into
submission,including time-tested weapons like rape, demonstrate that this
Left shares little with the Left ideals that we cherish.

Over the last decade, the policies of the Left Front government in West
Bengal have become virtually indistinguishable from those of other
parties committed to the neoliberal agenda. Indeed, â€œthe important
experiments undertaken in the State the land reforms referred to in the
statement - are being rapidly reversed. According to figures provided
by the West Bengal state secretary for land reforms, over the past five
years there has been a massive increase of landless peasants in the state due
to government acquisition of land cheaply for handing over to corporations
and developing posh upper class neighbourhoods.

We urge our friends to take very seriously the fact that all over the
country, democratic rights groups, activists and intellectuals of
impeccable democratic credentials have come out in full support of the
Nandigram struggle.

The statement reiterates the CPI(M)'s claim that "there will be no
chemical hub" in Nandigram, but this assurance is itself deliberately
misleading.
This is the explanation repeatedly offered by CPI(M) for the first
round of resistance in Nandigram â€“ that people reacted to a baseless rumour
that there would be land acquisitions in the area. In fact, as the Chief
Minister himself conceded in the State Assembly, it was no rumour but a
notification issued by the Haldia Development Authority on January 2,
2007 indicating the approximate size and location of the projected SEZ,
which triggered the turmoil.The major factor shaping popular reaction to the notification was Singur.

Singur was the chronicle of the fate foretold for Nandigram. There,
land was acquired in most cases without the consent of peasant-owners and at
gun-point (terrorizing people is one way of obtaining their consent),
under the colonial Land Acquisition Act (1894). That land is now under the
control of the industrial house of the Tatas, cordoned off and policed
by the state police of West Bengal. The dispossessed villagers are lost to
history. A fortunate few among them will become wage slaves of the
Tatas on the land on which they were once owners.

While the CPM-led West Bengal government has announced that it will not
go ahead with the chemical hub without the consent of the people of
Nandigram, it has not announced any plans of withdrawing its commitment to the
neo-liberal development model. It has not announced the shelving of
plans to create Special Economic Zones. It has not withdrawn its invitation
to Dow Chemicals (formerly known as Union Carbide, the corporation
responsible for tens of thousands of deaths in Bhopal) to invest in West Bengal. In
other words, there are many more Nandigrams waiting to happen.

In any case, the reason for the recently renewed violence in Nandigram
has been widely established to have nothing to do with the rumour or
otherwise of a chemical hub. Print and visual media, independent reports, the
governor of West Bengal (Gopal Gandhi) and the State Home Secretaryâ€™s
police intelligence all establish that this round of violence was
initiated by the CPI(M) to re-establish its control in the area. We all have seen
TV coverage of unarmed villagers barricaded behind walls of rubble, while
policemen train their guns on them.

With the plans it has for the future, regaining control over Nandigram
is vital for the CPI(M) to reassure its corporate partners that it is in
complete control of the situation and that any kind of resistance will
be comprehensively crushed. The euphemism for this in the free marketplace
is creating a good investment climate.

The anti-Taslima Nasreen angle that has recently been linked to the
Nandigram struggle against land acquisition is disturbing to all of us.
However, we should remember that it is largely Muslim peasants who are
being dispossessed by land acquisitions all over the state. There is a
general crisis of confidence of the Muslim community vis-Ã -vis the
Left Front government, inaugurated by the current Chief Ministers
aggressive campaign to clean up madarsas, followed by the revelation of the
Sachar Committee that Muslim employment in government jobs in West
Bengal is among the lowest in the country. While we condemn the attempts to
utilize this discontent and channelize it in sectarian ways, we feel
very strongly that it would be unfortunate if the entire anger of the
community were to be mobilized by communal and sectarian tendencies within it.
Such a situation would be inevitable if all Left forces were seen to be
backing the CPI(M).

This is why at this critical juncture it is crucial to articulate a
Left position that is simultaneously against forcible land acquisition in
Nandigram and for the right of Tasleema Nasreen to live, write and
speak freely in India.

History has shown us that internal dissent is invariably silenced by
dominant forces claiming that a bigger enemy is at the gate. Iraq and
Iran are not the only targets of that bigger enemy. The struggle against
SEZs and corporate globalization is an intrinsic part of the struggle
against US imperialism.

We urge our fellow travellers among the signatories to that statement,
not to treat the left as homogeneous, for there are many different
tendencies which claim that mantle, as indeed you will recognize if you
look at the names on your own statement.

Recording of The Communist Manifesto, by Karl Marx and Friedrich Engels.
Read by Jon Ingram

Text of the Communist Manifesto